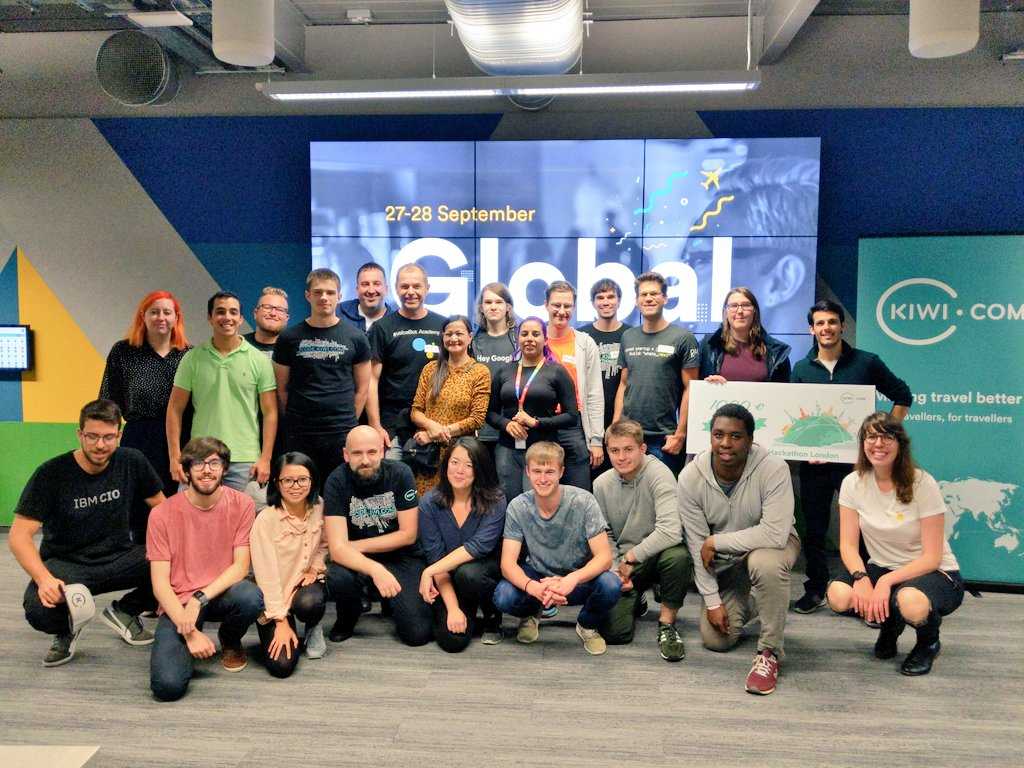 My first Hackathon as a UX/UI Designer

Last weekend, I participated in the Global Travel Hackathon, organised by Kiwi, mainly because I wanted to meet new people, practice my skills as a UX/UI Designer and of course have fun!

The idea behind the hackathon was to help make travel smarter, sustainable and accessible for everyone. It took place last Friday (Sept 27th) in 13 locations globally, with London being one of them. While I had a number of potential ideas with me, I wasn’t married to them and was more interested in working with a smart and friendly group of developers that I could enjoy the next 24 hours with.

Within the first hour of the event, I had both the team and the idea. The team comprised of 5 people, 3 developers (River, Quynh and David), 1 designer (me) and 1 entrepreneur (Angela). As for the idea, I immediately saw the value in it when I heard River, one of the developers pitch the concept early in the evening for potential collaborations.

I’ll start with the problem we were trying to solve, which was about making travellers — both at home and abroad, feel safe and well-informed particularly after dark, as that can have a substantial impact with how one experiences their trip.

However current solutions in the market don’t effectively address this problem.

On the one hand you have navigation apps such as Citymapper and Google Maps aimed at simply getting you from A to B, and on the other, you have personal safety apps such as Life360, Line Messenger and Guardly, but these are mainly used for emergency situations. The only app currently in the market that helps you get home safely is called Safe & the City, however this app uses official crime statistics as their metric of safety.

While this may seem like a pretty good proxy for safety, using such data can promote racial bias. In fact, a lot of work has been done by the UK government (such as the Race Disparity Audit and the Lammy Review) which highlights that both conscious and unconscious bias impacts who is stopped and searched, and who is convicted. Even the police force doesn’t want to use existing crime data for any AI solutions because they worry that it will increase profiling and prejudice — so why would we want to use it?

And research shows that this bias in crime data is not restricted to the UK: similar bias issues exist in America, Australia, Canada, France and New Zealand.

Our solution to this problem is BrightPath — a route finder app that uses both the street and meta data provided by OpenStreetMap, to find lit-up routes, so people can go home safely at night, assuming that brighter streets are safer.

We believe this can make travel more accessible by helping people feel safer and hence more confident about going out especially in the night. This not only includes the solo female traveller, but both visible and invisible minorities as well as those with different kinds of disabilities (e.g. partially-sighted) who are more likely to be conscious about safety when travelling.

Curious to see what we built? Check out our working prototype here. Click anywhere on the map to indicate the “Start” point and then click somewhere else, to indicate the “End” point. You will then see the safest walking route between these two location points. At the moment, the geographic cover is limited to London due to memory constraints from the server.

If you’re interested in learning more about the tech stack our team used during the hackathon, feel free to read one of my team member’s (Quynh) Medium article.

We ended winning the hackathon and to be honest I didn’t see that coming. I went with the mindset of learning and having fun which is like winning for me, but actually walking away with some travel vouchers which is great too :)

Next, we will make some adjustments and prepare for the global round!